Iggy Pop is enjoying a renaissance… and has been since the late 70s when David Bowie produced a couple albums for him in Berlin, which catapulted the inadvertent co-inventor of punk back into the stratospheric level of pop culture in which he belongs.

This last quarter of 2009 brings forth not one but two books where Iggy is a subject matter.

On November 1, Dave Thompson’s Your Pretty Face Is Going to Hell, which examines the relationship between Bowie, Iggy and Lou Reed is published.

But right now, Detroit-born and bred photographer, and CREEM Magazine revitalizer and its current publisher, Robert Matheu’s book, The Stooges: The Authorized and Illustrated Story is on book shop shelves.

Robert Matheu is a fellow photographer whom I met when he came West to LA from Detroit in the late 70s. We had then, and still do, have pretty much an identical circle of friends, and common musical interests.

CREEM Magazine was something we had in common – both as readers/fans and contributing photographers. Robert has the great honor of being photographed by the late Lester Bangs - below, at the last Stooges show in 1974. Robert is in the middle, with his friends, the late Lenny Gupa and Mark McHenry (whom Robert says I actually met at the Starwood - so - Hey Mark! rock on, dude). 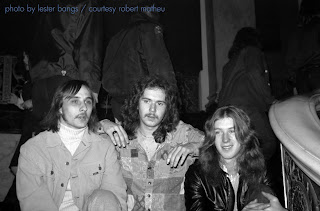 In the words of Robert Matheu

I started to take photos of The Stooges when I was 14 years old and didn't have a clue as to what I was doing with a 35mm camera, which was perfect since The Stooges didn't know how to play their instruments either. Not sure how it happened, but even after I found myself working professional, I had to go see Iggy every tour, I continued to go back to Detroit for almost every show he did there, not sure what or why. Even after The Stooges got back together in 2003, of course I saw the first show at Coachella and later when they announced a Detroit show in August of that year, there wasn't a question that I had to be there. I continued in the years since, the book grew out of that and my growing friendship with the band, what more could I add to it.

There’s a great feature in Detroit’s Metro Times about Iggy, the Stooges and this book. Read Bill Holdship’s Metro Times piece, which features an extensive, in-depth chat with Iggy here.

In New York City on Tuesday night (October 13), Robert will be signing his book at the Barnes & Noble store in Tribeca…. And with him, none other than Iggy Pop himself! Check the details at Barnes & Noble if you are in the area. It’s a not-to-be-missed event! 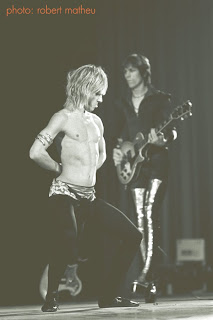 Thanks to Robert Matheu for letting me share his personal photos.
at 12:01 PM