Elmer Valentine, the man who gave me my first show-biz job at his nightclub, the legendary Whisky A Go Go, has died. He died last Wednesday, in his sleep. Although he was indeed an octogenarian, Elmer's health had been on a downturn over the last few years, and he passed away at the age of 85.

The Whisky A Go Go launched many careers during its 4+ decades as a venue, but none more brilliant than the very bands associated with the Sunset Strip scene of the 60s: The Byrds, Doors, Love, Buffalo Springfield, and Johnny Rivers - American musicians that put LA on the map. The British bands we all love played their debut shows on the Whisky stage: The Kinks, The Who, and The Jam, one of my favorite punk rock bands in the mold of the Kinks and The Who.

More than music, though, Elmer Valentine gave the USA the "go go" dancer!

A Chicago vice cop, Elmer Valentine did what all cops do when they retire from the force. They open a bar. But Elmer's bar had a bit part in a nightclub complete with go-go dancers, a dj and the most forward-thinking music of the times.

I really do believe it was Elmer who brought the whole 'go-go' notion to Los Angeles... maybe even the USA. In 1964, when the Whisky A Go Go opened, you could find young ladies wearing white go go boots and mini skirts with fringed hems dancing in cages. Sounds like the classic stereotype BUT... it was created at the Whisky, and all of the "a go-go" action that happened in pop culture happened as a result of the Whisky A Go Go on the Sunset Strip.

As you can glean from the ad in the LA Times, there was a brief period of time when the Go Go was not part of the Whisky name or marquee. In 1978, I'm proud to say, Lobotomy, the brainless magazine was part of a series of shows that, as the ad says, welcomed the "go go" back into the Whisky. That was one of the mid-70s things that I believe punk rock helped bring - excitement back to the Whisky.

Here's a clip from the LA Times, circa 1977, that explains how the Whisky was closed for a brief period of time... and in true art imitating life (and for younger readers, life imitating art) form - as they say in "This is Spinal Tap" ... closed for lack of interest... on the part of both the audiences and the club operators. There was a fallow period just before punk exploded... which is what helped add fuel to the punk fire... 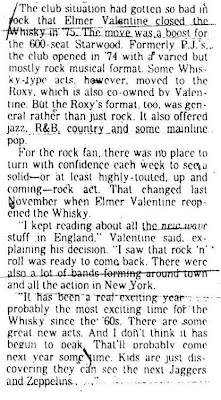 That he allowed his club's young bookers to let us - Lobotomy - have a series of nights at the club spoke volumes and shows that Elmer had his ear to the ground and his finger on the pulse. The young bookers (Pleasant and I were each among this group, at different times in ours and the club's life) brought punk, new wave and a new wave of metal bands to the Whisky stage and as a result, groups as disparate and The Germs and Van Halen launched their careers.

Alley Cats bassist, Dianne Chai stands outside in front of the Whisky a Go Go on a Lobotomy night when she shared the stage with X and the Flesheaters. She's expressing the intensity of the times and her excitement is contagious. You can see a local girl just smiling at the scene.

As The Germs enjoy another 15 minutes of fame courtesy of the feature film, What We Do Is Secret, I must reiterate that for all the for real hardcore cred The Germs have, for all the Masque gigs they did, and gigs at every hole in the wall in the greater Los Angeles area... they made their on-stage debut at a club owned by Elmer Valentine --- The Roxy.

Darby Crash performs on Lobotomy Night at the Whisky, 1978

The Germs' first public performance was less than two songs in duration at the audition for the Cheech & Chong movie Up In Smoke. The audition was a cattle call battle of the bands and Darby Crash planned on taking it over. Between Darby, Marcy Blaustein and I, we snuck in a jar of peanut butter and a tape recorder. Marcy and I sat at the front and center table with our punk rock tools of the trade concealed. The band came on stage and I pressed the "play" and "record" buttons. Does this mean I produced the track? It IS the b-side of the "Forming" single (which by the way, has been beautifully reissued by Alive - get it if you don't have it!). Right on cue, he received the peanut butter from us. And then the power was cut and the Germs got the goat hook. Not a punk rock club, but at one of Elmer Valentine's clubs... and it stands today as thee most punk rock act of the entire era.

In 1980, while dutifully documenting each and every band who played the club, I photographed the up and coming Huey Lewis & the News at the top of the backstage stairs, against the wall that bore graffiti proclaiming that Suburban Lawns had been there. Sixteen years after they played their month of Monday night gigs at the Whisky a Go Go, Huey Lewis & the News released a greatest hits compilation with my photo. Must've been a combination of their youth and the legendary location that made them slap my shot on that record. Like so many photographers of that time, I did not receive photo credit (but I did get paid and very well) - but this is part of my Whisky A Go Go legacy, so I share it with you.

The time I spent at the Whisky, as a member of the audience, or working in the box office or in the upstairs office is about 75% of how the photos on this blog came into existence. Not very many people can say that the place where they worked brought so much excitement into their life or into the lives of many thousands of others.

The wonderful graffiti'd walls of the stairwell and backstage area were the back-drop to many of my favorite images.

You can buy prints of these two backstage images from Metropolis Gallery - they are part of my Unguarded Moments: Backstage and Beyond tour.

Belinda Carlisle and the Drake brothers

The Whisky A Go Go was my home away from home for a good 5-year chunk of my life. I even lived behind the club (on Clark St... 1140 N. Clark to be exact and moved into that building way before my future bad neighbors, Nicky Sixx, Tommy Lee and Vince Neil... a k a Motley Crue did), making it easy to get to work on time always - with my 30-second commute, I was able to work both day and night... living the punk rock life extra large.

Rest in Peace old man. You do deserve the rest, and say HI to Stiv for us!