Proud of our Punk Past and Present 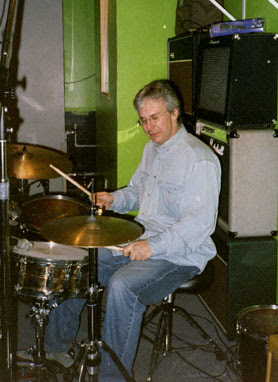 This guy here on the drums - this 40-ish, father of two, well-respected lawyer, David Steinberg, Esq. a partner in his firm...used to be a serious punk rocker. Hand picked by Stiv Bators to succeed Johnny Blitz in the final version of the Dead Boys that would morph into Stiv's own solo backing band. We called him "Quinton" back then - David Quinton, and he got on Stiv's radar because he was the Keith Moon-like drummer for Toronto's Mods.

This was David when I met him. He's just 18 years old here (in the stripes): 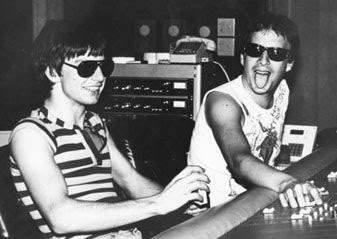 And while he may be the Man, the disciplinarian and boss of their household, I know David's kids have got to think their old man is the coolest dad ever. And I know that David is proud of his punk past. 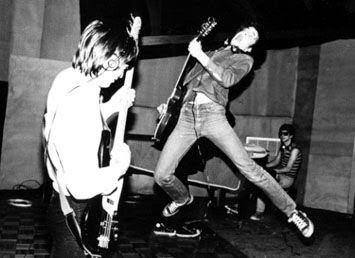 Here's Frank Secich and George Cabaniss also of that Dead Boys-turned- Stiv-solo band. Young, loud and out of control. 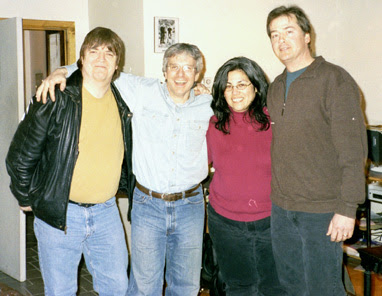 And here we all are many years later, having a family reunion of sorts in Stiv's home town.

Certainly as punk rockers, we did a lot of stupid things. Most of us were some kind of dorky social reject on some level also. But we all found each other and within our loosely defined social construct, found acceptance on the same terms that mass culture rejected us - whether it be for our taste in music or clothes, mannerisms and behavior, or our desire to reject the mainstream. Ours wasn't a utopia by any means. It was just as clique-ish as any high school and there were the mean girls and tough dudes and all the same types and tropes... only they were more like us than they were different.

Some people, in whatever they do, end up repudiating everything about their youth - one of the philosophers whose work I read in college (meaning: they're all blurring into each other and I can't be sure which of these men did this), either Wittgenstein or Betrand Russell wrote up a whole way of looking at the world, only to reject his own work years later. OK... times change, we grow and change.

Well, I for one, am quite proud of my punk past, and I know many people are proud of theirs too. How often does the normal course of your life collide head-on with a major cultural paradigm shift that seems to have affected the creative world? It was great to be there and watch it happen. I feel like Forrest Gump!

On the other hand, there are people who want to bury it, deny it and reject their own slice of life - which is fine... but when you try to accommodate them, you ignore some vital facts. Like that they existed.

But this post is about people who are proud of the footsteps they left. I'm a member of that club. So are the people you see pictured here. My family photo album/scrapbook. 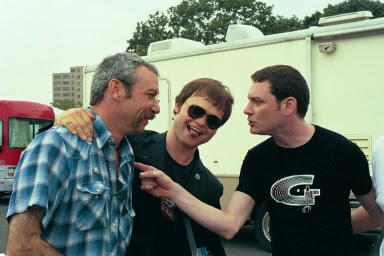 Recognize Mike Watt on the left? I saw him the other day and apart from being gray, he's the same dude from Pedro... driving the Econoline van... his life perpetually jammin' econo. Still lives in Pedro. That's San Pedro, for those of you who aren't from the greater LA area. Joe Nolte, of The Last still calls Pedro home. Far from being stuck in the muds, these men have stuck to their guns their whole life, not apologizing for who they were and what they thought. Ever. And they still believe in their credo. Now THAT'S punk, and its punk rock. 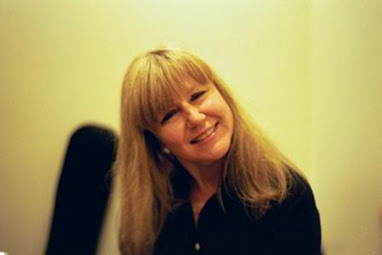 Miriam Linna, a lady who's whole life has been making the world of music better for those who care. Some couple of decades after she was playing drums in the Cramps, she's still playing drums - in her own reunited-after-many-years-combo, The A Bones with Billy Miller, her partner in all things cool, like life and music. They ARE Norton Records. I think she's proud to have made the musical contributions and lived the crazy rock n roll life she's had... and she's still doing it. 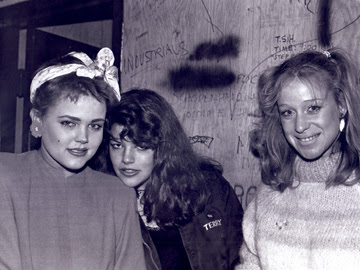 Not only were they the prettiest girls of punk rock, Belinda, Pleasant and Wyline can't shake their punk rock past. Having lived well-documented lives, how can they? Belinda is continuing to do shows with the Go Go's and Pleasant is still writing and Wyline is making the scene, taking pictures and being the best gal pal one could have. I don't know if you've seen Pleasant or Wyline lately... but they're as beautiful as ever and going strong. If there is anyone who's memory about LA punk is authoritative, it's Pleasant...the be all and end all diarist/documentarian if ever there was or should be one.

Alice Bag has made one of the greatest contributions to preserving the memory of all this punk rock - and makes me proud to be an LA woman. Please read her site often. It is a living, loving testament to all we have experienced. 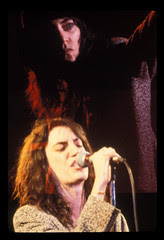 Patti Smith, quite probably the first woman I looked up to - from her poetic background and how she turned that into being a punk lady hero for people like me, to her period of retirement to live a family life - Patti did what she wanted to do. She and I have often talked about how proud she is of her son, Jackson, who inherited his father's guitar chops (and guitars) and his mother's clear blue eyes. 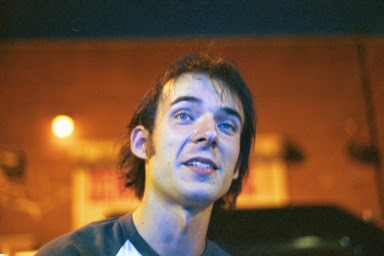 I'm proud of Jackson, too... don't know why... he's a good kid who's come a long way and I'm always so happy to see him when I'm in Detroit. (But where was the karaoke, huh? I really wanted to see a Jackson/Marcie duet...and sorry I couldn't get Eddie to perform.)

I proud of my punk rock past and the souvenirs I was able to create from running around with a camera. And even though I had an often-taxing few years stuck in thee garage, I am happy to have been able to help a lot of bands and proud to have been a part of the process of getting some of them some time on the airwaves ...

This picture of me with Jim Diamond (a fellow half-Spartan, just like me) was taken at a party on the day that I knew that the music "biz" was never gonna change. I am proud of Jim for making such great sounding records for years and years, but mostly I'm proud that he's sticking to his principles, no matter what anyone says. 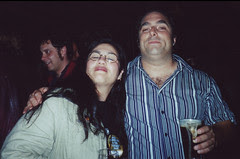 And exactly a year later,after having those premonitions of an unchanging "biz," I was put into a place where I felt like I was forced to choose between "the man" and Cheetah Chrome. Naturally, I picked Cheetah.
at 7:25 PM