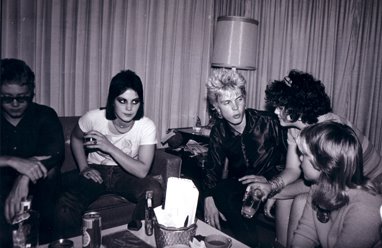 Here it is, in its full frame, uncropped glory - Joan Jett at home with her pals, Billy Idol, Pleasant Gehman and Brad Dunning. Yes - Brad Dunning, who designed the logo for Lobotomy, the brainless magazine, and who had his own zine called Contempo Trends. Brad Dunning who is now an interior designer to the stars! Brad Dunning is the man on the far left side of the frame, next to Joan. The man looking down at his shoes. Of course, there's Joan, Billy, and Pleasant. The young girl next to Pleasant is the little sister of my roommate at the time.

Joan lived in the mint-green painted stucco two-story apartment building on San Vicente Blvd. right behind the Arco gas station on Sunset. A year after this photo was taken, I would move into the other famous West Hollywood apartment I inhabited: 1140 North Clark St. (Motley Crue would eventually move in downstairs; Lita Ford would be a frequent visitor). But before there were two party palaces on either side of the Whisky, Joan pretty much hosted them all.

There were always visits from punks Joan met on the road

with Stiv Bators and Cynthia Ross

and Joan could rub elbows with the best of them on their turf too:

with Nigel Harrison of Blondie

and always there, whether at home or on the road, always loyal, lending a hand when it was needed, was Kent Smythe.

Kent was the Runaways main road crew guy. He was Joan's loyal go-getter and right hand man. So many pranks we pulled on Kent and he took them like a sport! I would normally delineate them for your amusement, but it takes away from his dignity (of course, you can find some hilarious stories on the web). I was saddened to learn recently that Kent was in a serious motorcycle accident recently. He was the sweetest guy...if anyone out there is reading this and knows Kent, please send him my best wishes.
at 9:52 AM

Wow, I hate to hear that about Kent. He also did some work with The Dickies. There's an interview with him here.

Hi...I am one of Kent's nieces; my mother is his oldest sister.

According to my mom, Kent is doing ok. He stays busy doing various things with music and gets out when he can. He still lives in the same place he always has. He's still the same old s.o.b., too, from what I hear ;)