You know that song, Lust for Life. Its got a long intro, very catchy - rhythmic, primitive guitars and drums inject in you a lust for life if you didn't already have one. And at some point in the 1990s, it seems that every advertising agency plucked the Iggy Pop - David Bowie composition to represent their product or service... a cruise line is the only one I can remember, but the song has been on TV and in movies even more... its in the early, pre-Material Girl era Madonna flick, Desperately Seeking Susan, and its in the spectacular Trainspotting which is a turning point in the song's visibility on the pop culture radar. On TV, aside from the cruise line commercial, Lust for Life provided cultural currency and narrative attributes to The Simpsons and for Drew Carey.

Lust for Life, the album, was the second solo album Iggy released in 1977 (on September 9), just a few months after his "come-back" album, also recorded in Germany and produced by David Bowie, The Idiot. Iggy toured the US in support of The Idiot in the spring of 1977, soon after its release, and he did indeed preview songs from Lust for Life which had his audience on their feet and dancing in the aisles -- which for an Iggy Pop show is kind of subdued... remember, this is the guy who started the whole smearing peanut butter on himself, cutting himself and he probably invented stage-diving. 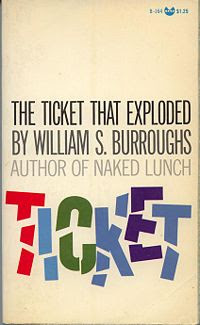 I don't know how many of Iggy's fans are aware... or if they even care... that the song is packed with references to counter-culture / junkie author William S. Burroughs' 1962 novel, The Ticket That Exploded. The song begins: "Here comes Johnny Yen again..." Well, "Johnny Yen" is a Burroughs character described as The Boy-Girl Other Half strip tease God of sexual frustration. The lyric "That's like hypnotizing chickens" is also from the novel.

The Ticket That Exploded is the second work of a trilogy of Burroughs' experimental novels known as The Nova Trilogy. The main characteristic of this trilogy is that it employs the "cut up" technique. The novels, the titles of which are probably more familiar than the plots (because musicians took these titles as their band names) deal with the idea of language as a virus and of Burroughs' philosophy of the cut-up technique. Additionally, in a completely post-modern and self-referential way, the trilogy makes use of the cut-up technique by characters within the story itself. Finally, The Ticket That Exploded is a harbinger for Burroughs' ideas of social revolution through technology, culminating in his essay, The Electronic Revolution.

The Nova Trilogy consists of The Soft Machine, The Ticket That Exploded and Nova Express. Even the most casual fan of late 20th century rock n roll will recognize The Soft Machine as the name of Kevin Ayers and Robert Wyatt's psychedelic fusion band. Fans of Eno and Bowie will recognize the "cut up technique" as one of theirs. There's a Dutch band called The Ticket That Exploded and Husker Du's Grant Hart formed a post-Husker Du band called Nova Mob, after the gang in the Trilogy. Needless to say, there's a whole cyber punk subgenre of literature that exploded as a result of geeks and nerds reading the Burroughs trilogy. But wait... it gets better... "Lust for Life" is the title of a 1956 narrative motion picture about the life of Vincent van Gogh, with Kirk Douglas in the role of van Gogh. Anthony Quinn was cast in the role that won him an Oscar -- as Paul Gaugin. OK - I saw this movie and... well... I saw this movie. For my money, Tim Roth plays a superior van Gogh. Thirty-one years since its release and "Lust for Life" is as fresh and vital as ever. No matter how much I love the Ramones, this Iggy Pop-David Bowie song might just be the most enduring of all the songs released during punk rock's golden age.
at 12:04 AM